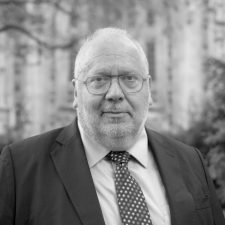 At the request of the Minister for Prisons, he led an Independent Review on the Deaths of Young People in Prison Custody.  The report (“The Harris Review: Changing Prisons, Saving Lives”) was published in July 2015 and was the most substantial review of penal policy for nearly thirty years.  He was also Chair of the Independent Advisory Panel on Deaths in Custody that reported to the Ministry of Justice, the Home Office and the Department of Health from 2009 to 2015.

He was born in 1953 and graduated from Cambridge University in 1975, having studied Natural Sciences and Economics and where he was President of the Cambridge Union.  His professional career began with four years in the Economics Division of the Bank of England.  He then spent seven years at the Electricity Consumers’ Council, becoming Deputy Director in 1983.  In 1987, he became Director of the Association of Community Health Councils for England and Wales (the national statutory body representing patients’ interests).  He remained there until October 1998, when he established his own public affairs consultancy, Toby Harris Associates, which advises a number of major public and private sector bodies. He is a non-executive director of Cybersecurity Challenge UK.

He was a member of Haringey Council from 1978 to 2002 and was its Leader from 1987 to 1999, having previously spent five years as Chair of Social Services.  He was Chair of the Association of London Government (now London Councils), representing the 33 local authorities in London, from its formation in 1995 until 2000, and is now one of its Joint Presidents.  He previously chaired the Association of London Authorities.

He chaired the Wembley National Stadium Trust from 1996 to 2018 and the Freedom Charity from 2009 to 2015. He was the first Chair of the Institute of Commissioning Professionals, has been a non-executive director of the London Ambulance Service, a Senior Associate of the Kings Fund, and a member of the Committee on the Medical Effects of Air Pollutants.  He is a former member of the Committee of the Regions of the European Union.